Dairy and dairy alternatives: what you need to know

Choosing between dairy and darity alternatives - based on scientific research

The subject of dairy is a complex web of confusing media headlines and fad-diet led claims but here at Igennus, we’re more interested in educating our customers on validated research helping to lay bare the truth, so you can make an informed decision on whether something really is good or bad for you. 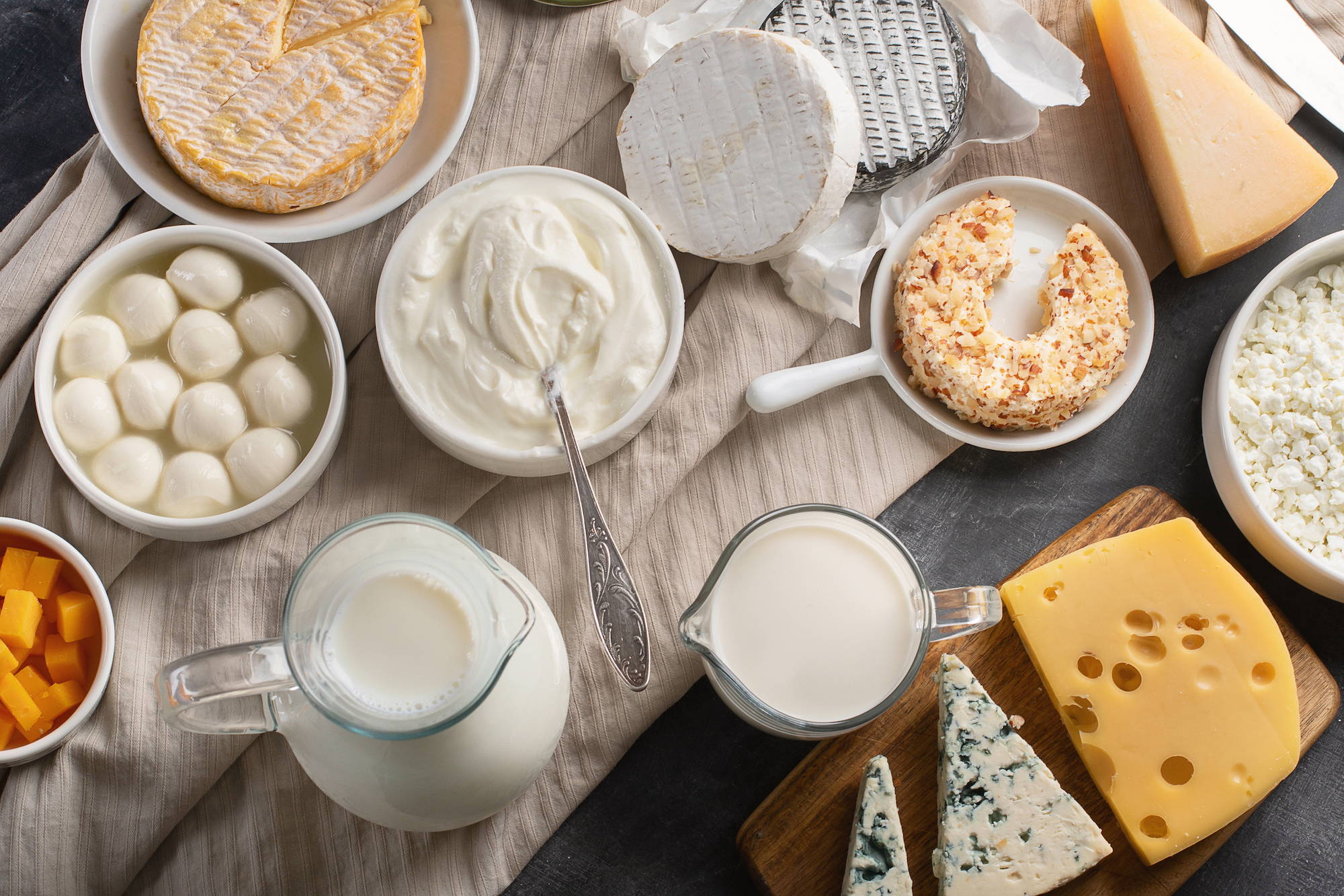 So, what is ‘dairy’? Anyone who doesn’t eat dairy (for whatever reason) will have been faced with the same confusion time and again: you walk into a restaurant, have a conversation with the waiter about your dietary requirements, and they ask if that means you can’t eat butter, cheese and eggs. So, just to be clear, according to the Oxford dictionary dairy encompasses milk and milk-containing products, i.e. butter, cheese, yoghurt and, technically, this includes milk produced from all animals. In other words, eggs are not dairy.

Focusing on traditional cow’s milk, it is produced from lactating dairy cows that lactate for the same reason women do, to feed their offspring. And here begins the debate. We are the only mammal that drinks the milk of another species. Why? Well, it is believed that dairy farming began as long as 7500 years ago. Dairy is relatively cheap to produce, with lactating cows producing more than 7,500 litres per cow each year, the fluid containing 30% carbohydrates, 49% fats and 21% protein, as well as providing a source of calcium, vitamins B2 and B12. So it appears that there was a need and milk was able to cater for this.

But does this mean that we should be drinking milk now?

Well, you may be surprised to hear that 65% of the population worldwide are believed to be lactose intolerant (lactose being the sugar found in dairy), although there is a much lower incidence of lactose intolerance in northern Europe (1). Ordinarily, humans produce an enzyme called lactase in their small intestine to help the body break down lactose once it has been ingested. Humans start producing lactase before birth, with levels of the enzyme decreasing during the weaning period, leading to lactose intolerance. However, adults in northern Europe appear to have adapted through a complex system to allow the body to continue producing lactose beyond the nursing period. So actually, it appears that evolution is favouring milk consumption for many of us Europeans.

One argument for this adaptation looks at the requirement of vitamin D for calcium absorption. Calcium is required to build strong healthy bones, aid in blood clotting, and help nerves send messages throughout the body, but absorption of calcium is reliant on vitamin D. Whilst we can obtain small amounts of vitamin D from food, most of this is produced by our skin through sun exposure. With much lower exposure to sunshine in northern latitudes and small amounts of vitamin D found in dairy, it is surmised that we adapted to be able to consume dairy for the nutritional benefits.

Is dairy therefore good for you?

Looking at the research, dairy from cows not only provides a source of calcium, vitamins D, B2 and B12, it also contains oligosaccharides which feed the good bacteria in your gut, (2) a win for everyone, unless of course you are lactose intolerant. Studies have also suggested that the use of dairy products have had positive effects in the fitness industry, with accelerated recovery being demonstrated with use of a dairy-based beverage post exercise. (3) Furthermore, in terms of weight loss, regular consumption of dairy products has not only been shown to be associated with reduced weight gain and risk of obesity, but has also shown greater loss in bodyweight and fat mass when consumed as part of an energy-restricted diet. (4, 5)

When we consider the origin of the dairy products we are consuming, we need to look at the difference between organic and non-organic milk. By definition of the Soil Association, organic dairy cows must be at pasture when the weather permits, at least 60% of their diet must be grass, and routine antibiotic use is banned. Furthermore, organic milk produced from dairy cows is subject to fewer pesticides and no artificial fertilisers are used on their pasture, meaning less exposure to endocrine-disrupting chemicals (EDCs) which have been linked to health problems including breast cancer in women, and decreased reproductive ability in men. You can read more about EDCs here.

Antibiotics are often given to dairy cows to treat infections of the breast tissue; however, it is argued that regular use of antibiotics in dairy cows is contributing to antimicrobial resistance, i.e. they are reducing the effectiveness of antibiotics when they are needed. (6) With organic cows, antibiotics can only be used when they are necessary. Supporters of antibiotic use argue that if cows were unable to routinely receive antibiotics, this would negatively affect the amount of food (milk) that could be produced, which would then have an impact on the price, as evidenced by the current higher price of organic over non-organic milk.

There is also variation in the nutritional value of organic milk in comparison to non-organic milk. A meta-analysis from 2016 suggests that organic milk has a more desirable fatty acid composition, containing 57% more long-chain omega-3 fatty acids EPA, DPA and DHA, with a (desirable) lower omega-6 to omega-3 ratio. Furthermore, organic milk contains higher iron and vitamin A levels but lower levels of iodine and selenium. (7) In comparison, non-organic milk contains higher levels of vitamins B1 and B2. (8) The difference in nutritional value comes down to the diet of the animal producing the milk, with organic cows eating more fresh pasture, and non-organic cows eating more grains, as well as being supplemented with nutrients such as iodine. (8) But that’s not to say that organic cows aren’t also eating grains to substitute their diet when they don’t have exposure to fresh pasture. The nutritional value of milk also varies from one batch to the next due to factors including the season in which the milk was produced, the way the individual farm is managed, the surrounding environment of the cows, the breed, their stage of lactation, and the age of the cow, as older cows may have been exposed to more heavy metals. (8) 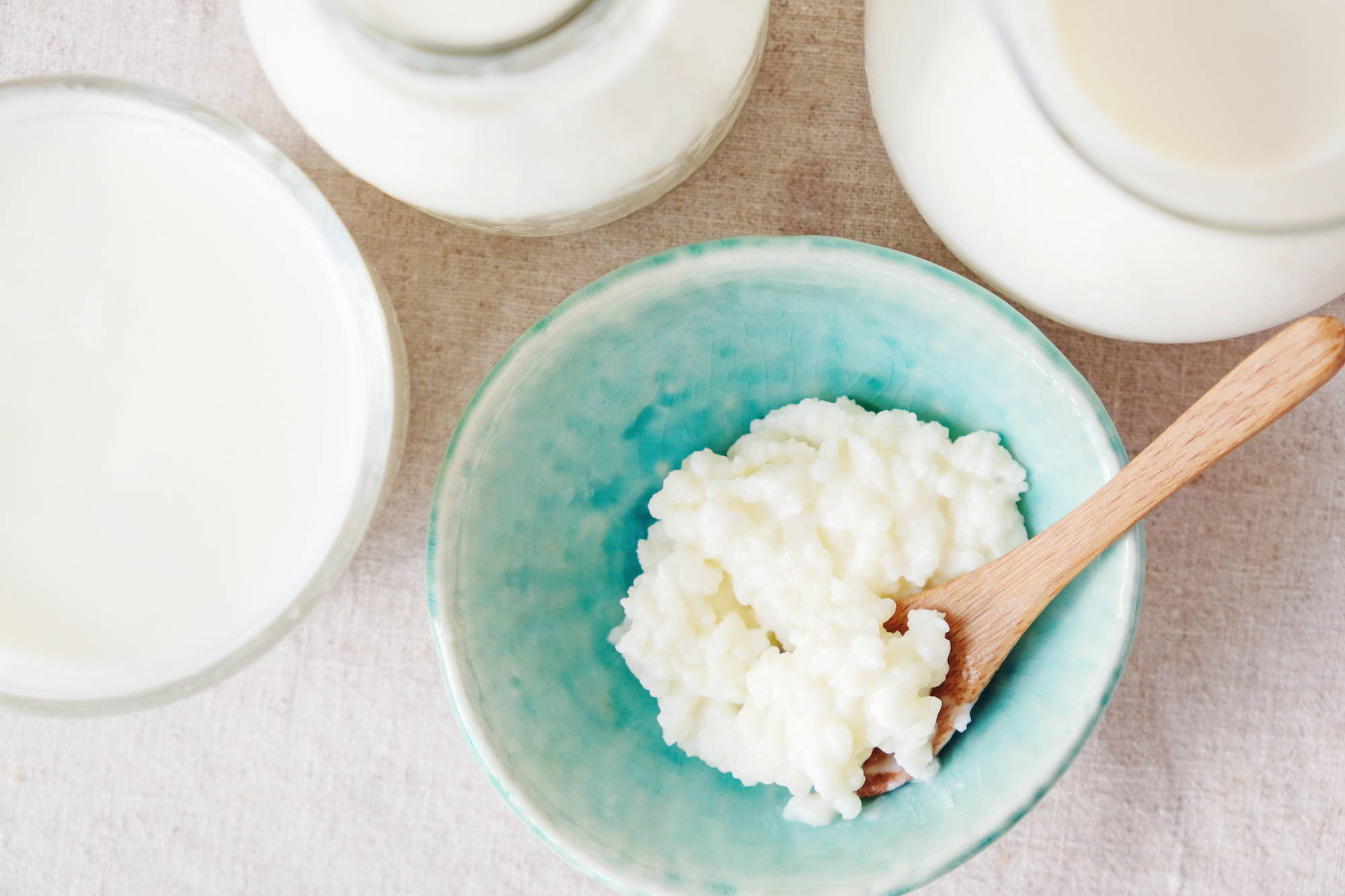 An important factor to consider when pondering the decision of whether to consume dairy products really depends on your health and your requirements. If you do display signs and symptoms of lactose intolerance such as abdominal pain, diarrhoea, bloating, flatulence and cramping, you should probably steer clear to reduce the negative effects. Before you worry about having to deal with no more dairy, fermented dairy products do contain less lactose so you may be able to tolerate yoghurt, sour milk and cheese. Ensure you check the label to see if they contain natural live cultures, as this would suggest that they have been fermented. You could even try fermenting your own milk with kefir grains to make a brew that is not only lower in lactose, but also full of probiotics to feed your gut bacteria. (9)

Furthermore, if you do display signs of lactose intolerance, you may also be interested to know that this could be due to casein, not lactose. (10) Casein is the protein in cow’s milk and comes in two forms: A1 (implicated in adverse gastrointestinal effects of milk consumption) and A2, with studies showing that those with self-reported intolerance to cow’s milk having fewer digestive complaints when drinking cow’s milk with A1 removed. You may need to experiment a bit to see if purchasing lactose-free milk reduces the symptoms, or try A2 milk and see if that helps, both of which can be purchased online and may be available in some supermarkets. Unfortunately, fermented cow’s milk doesn’t affect the casein levels of the food.

In terms of dairy from other animals, goat’s milk can now be purchased in many supermarkets, and you can usually pick up goat cheese, sheep cheese (feta, halloumi, manchega) and buffalo cheese (mozzarella) too. Milk from these animals is believed to contain less lactose and lower levels of casein A1 than cow’s milk, so if you struggle with cow’s milk, you may be able to tolerate these alternatives.

Another way to decrease exposure to lactose and casein altogether is to consider a plant-based milk or cheese alternative such as almond, coconut, soya, hemp or rice milk, as well as many others. You may need to compromise on the taste a little, but if you try a few different ones you should be able to find one that you enjoy. You also need to be aware that whilst cow’s milk is naturally a good source of macronutrients such as protein, fat and carbohydrates, this may differ with alternative sources. This table highlights the amount of protein, fat, carbohydrates and calcium found in different milk sources. 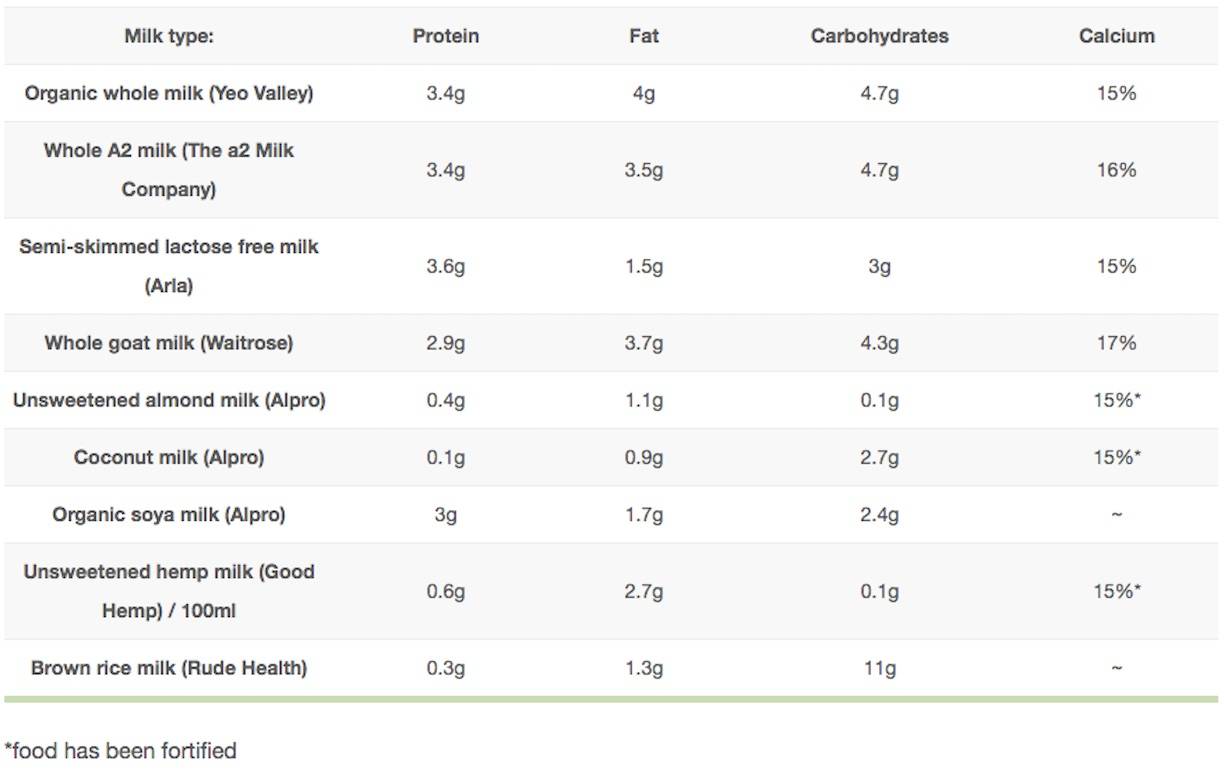 As you can see, whilst soya milk is a good source of protein, other plant-based milks have much lower protein levels, so if you are substituting animal milk for a plant-based milk alternative, you may want to track your protein intake, using an app such as My Fitness Pal, to ensure you are still meeting your daily requirements (this article will explain how you can work out your daily protein requirements).

Whilst animal milk naturally contains calcium, many (but not all) plant-source milks are also fortified with it. If your plant-based milk alternative is not fortified with calcium, other food sources of this mineral include tofu, dark green leafy vegetables (spinach, collard greens, kale, Swiss chard, etc.), cinnamon, sesame seeds and sardines.

Vitamins B2, B12 and D are often not recorded on the nutritional table of many animal types of milk and are not always fortified in plant-based milk alternatives either. Ensure you read the labels to see if your milk of choice is being fortified. Alternative food sources of vitamin B2 include dark green leafy vegetables, eggs, asparagus and mushrooms. If you are vegetarian or vegan, you may want to consider supplementing vitamin B12 from a vegan source such as Super B-Complex (which also contains vitamin B2); otherwise you can obtain vitamin B12 from meat, fish and eggs.

Vitamin D is very difficult to obtain solely from the diet with a recommended daily intake being obtained from a portion of salmon, 2.5 servings of sardines or 710ml of cow’s milk (or 670ml of plant-based milk alternative that has been fortified). As the FDA recommends eating a maximum of 2 – 3 portions of fish per week due to the levels of mercury found in fish, it may be best to consider supplementing with Pure & Essential Daily Vitamin D3 which provides a high-strength vegetarian source of vitamin D.

Whilst intolerance symptoms are no fun, there are so many alternatives now that it’s never been easier to overcome symptoms; even Hotel Chocolat provide chocolate made with buffalo milk, and Ombar make delicious creamy chocolate from coconut butter! It may work out a little more expensive to purchase plant-based milk alternatives, as you can’t buy them in small pint sized bottles; however, they tend to last much longer than animal milk so may prevent wastage if you don’t get through it quickly enough. Alternatively, why not consider making your own, that way you can make the amount you need, it’s as fresh as it can be, and there are fewer artificial flavours and sweeteners being added. If you don’t like one alternative, don’t let that put you off, there are so many out there to experiment with. Hopefully, the industry will also improve on its plant-based cheese soon…

Whilst this article has delved into the differences between dairy and plant-based alternatives, stay tuned for our follow-up feature which will focus on dairy processing techniques pasteurisation and homogenisation, and the pros and cons of raw milk.

If you require more support, feel free to contact our approachable team of nutrition professionals who will be more than happy to support you further or point you in the right direction.