As the building blocks of proteins, amino acids play many important roles in the body. There are about 500 known naturally occurring amino acids, but only 9 of those are termed ‘essential’ (see table 1). These cannot be made by the body but must be consumed in the diet. Foods containing a significant proportion of all 9 amino acids are known as ‘complete proteins’. Animal foods are rich sources, while examples of complete plant-based proteins are soya, quinoa, buckwheat and hemp seeds. In supplements, amino acids are found in tablets, capsules and protein powders. 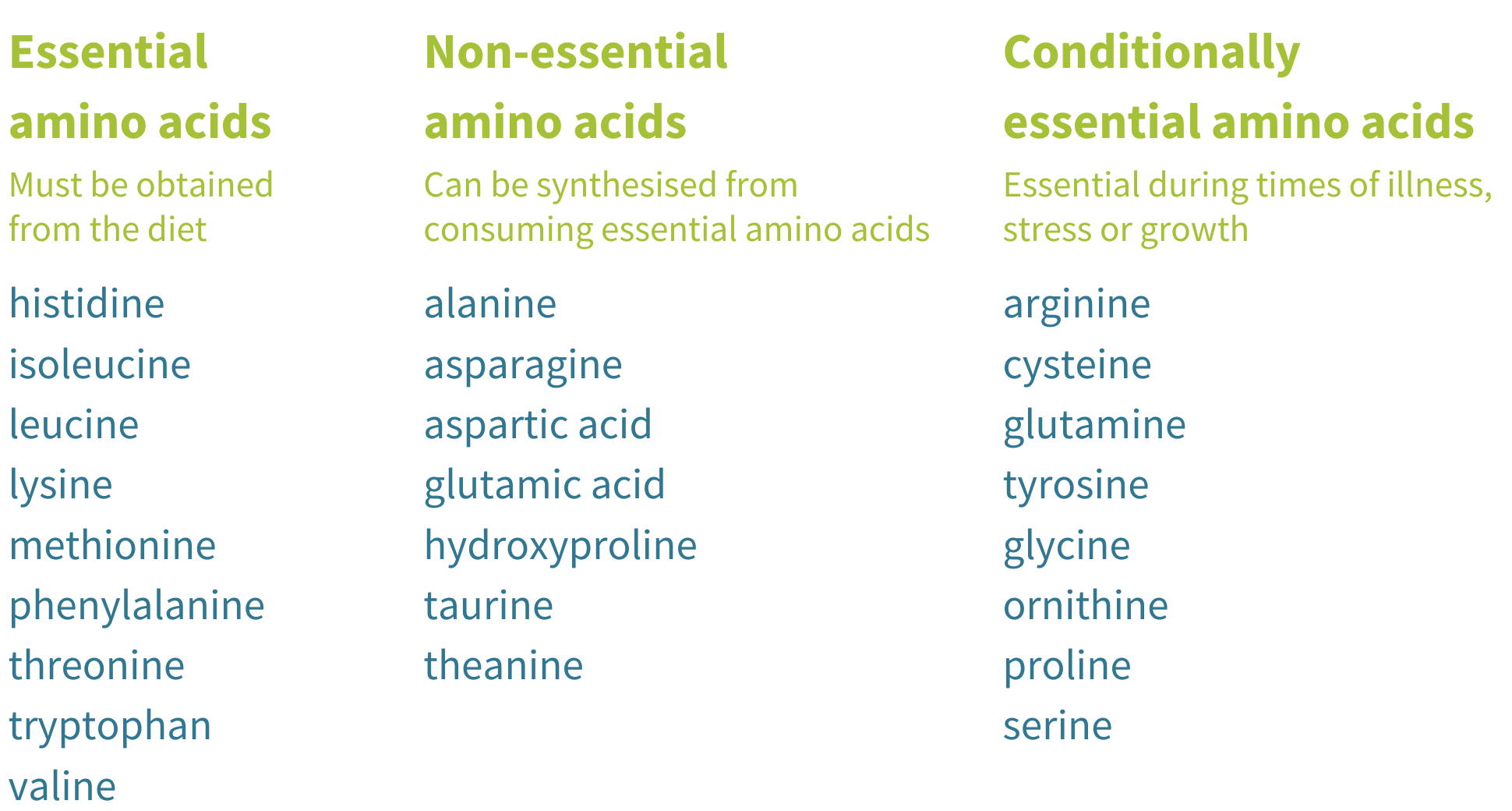 Our range of collagen protein powders consist of a specific amino acid make-up to support collagen synthesis, whilst we utilise amino acid therapy alongside other nutrients in FOCUS and MindCare BALANCE to target different aspects of psychological and cognitive wellness.

Identified by Japanese scientists in 1949, theanine is an amino acid that makes up about 1% of the weight of green, black and white tea. Interestingly, deliberately shading tea plants from direct sunlight, as is done for matcha tea, increases L-Theanine content. It is also found in mushrooms and is thought to contribute to ‘umami’, the savoury taste. The L-enanthiomer is the form found in freshly prepared teas and some dietary supplements. This form is most often used in research, while D-Theanine is less studied. L-Theanine is absorbed by the small intestine and is then able to cross the blood-brain barrier.

L-Theanine has been shown to increase the production of calming GABA, mood-boosting serotonin and rewarding dopamine, as well as alpha waves - the brain wave most often associated with ‘wakeful relaxation’. L-Theanine is also structurally similar to excitatory glutamate, an essential neurotransmitter which, in excess, is linked to anxiety and pain. By attaching to glutamate receptors, L-Theanine can reduce the action of glutamate and instead exert a calming effect.

L-Theanine is included in a dose of 150mg per capsule in MindCare BALANCE, which is the equivalent amount of drinking at least 10 cups of green tea. We combine it with magnesium glycinate, which reduces tiredness and fatigue and contributes to psychological functioning as well as the normal functioning of the nervous system.

L-Theanine is also included in FOCUS for its synergistic benefits with caffeine, supporting mood, motivation, cognition and memory.

A non-essential amino acid, taurine can be obtained from meat and fish. For those following plant-based diets, the body can produce taurine from methionine or cysteine, often relying on adequate vitamin B6, B12 and folate for conversion. In the body, it has multiple roles: supporting energy metabolism, especially in the heart where taurine is found in abundance; as an antioxidant; as an inhibitory neuromodulator mimicking the calming effects of GABA.

Along with caffeine, taurine is added to FOCUS at a dose of 200mg. Combining taurine with caffeine is known to heighten mental alertness and calm the stimulating effects of caffeine.

Tyrosine is a non-essential amino acid present in most dietary sources of protein and can be synthesised in the body from phenylalanine. In the body, tyrosine is a precursor to thyroid hormones, melanin and catecholamines - hormones released by the adrenal glands including dopamine, norepinephrine and epinephrine (adrenaline). During times of stress, tyrosine supports cognitive function.

As caffeine can stimulate the production of catecholamines, tyrosine depletion can occur. We add L-Tyrosine to FOCUS to work synergistically with caffeine, replacing depleting stores and maintaining cognitive function.

Collagen is the most abundant protein in the body and is identified by its unique structure, 50% of which is made up of three key amino acids - hydroxyproline, glycine and proline - with the other 50% made up of various amino acids. Furthermore, these three amino acids are found in a very particular ratio within collagen - 1 hydroxyproline:1 proline:2 glycine.

Pure & Essential Advanced Hydrolysed Collagen Peptides provides collagen obtained directly from the hides of grass-fed cows and is an ideal supplement for anyone seeking to benefit from collagen.

For followers of a plant-based diet, however, no plant sources of collagen exist so the body is reliant on the availability of the three collagen amino acids, plus a supply of other amino acids to form the other 50% of collagen's structure (which can be obtained from consuming quality protein sources) and co-factors including vitamin C. Vegan diets tend to be lower in all amino acids in comparison to a meat-eating diet.

Of these three collagen amino acids, hydroxyproline is often absent from vegan diets, the only source being alfalfa sprouts, in minute amounts. Whilst it can be produced in the body from proline and co-factor vitamin C, the body will prioritise using nutrients for survival functions over collagen production for hair, skin and nail health, for example.

Vegan Pro-Collagen provides an ideal solution for those following a plant-based diet; this not only provides the nutritional foundations required to support collagen production but also provides full-spectrum amino acids for topping up dietary intake. In comparison to meat eaters, vegetarians and vegans generally consume 43% less lysine and 47% less methionine, both of which are essential amino acids and must be obtained from the diet. amino acids As the building blocks of proteins, amino acids play many important roles in the body. There are about...