With magnesium supplements commonplace on practitioners’ shelves, how can we be sure that the product we recommend will offer the most effective solution to optimising both uptake and retention of a client’s magnesium levels?

September sees the launch of our new ‘Triple Magnesium Complex’, a trio of citrate, bisglycinate and taurate, all in their ‘fully reacted’ forms (not ‘blended’ or ‘buffered’, meaning there’s no added magnesium oxide to artificially boost elemental label claims), ‘chelated’ (bonded) synergistically to target multiple absorption pathways with no risk of unpleasant gastrointestinal (GI) side effects.

Magnesium: ‘ A review of the basics’:

Magnesium’s numerous benefits are well documented, and range from supporting normal energy release and improving muscle function (relieves muscle aches and spasms), to electrolyte balancing, regulation of nervous system function and normal psychological function (calms nerves & anxiety, improves mood and aids in sleep regulation). It is an essential mineral, required for the absorption and metabolism of other essential minerals and acts as a co-factor for enzyme activation required for over 300 biochemical reactions and metabolic functions including carbohydrate, lipid, protein and DNA metabolism, immune system, nerve and muscle function.

The consequences of magnesium deficiency

Table 1: Health conditions and diseases associated with low magnesium status for which magnesium therapy is, or may be, beneficial [adapted from 6 & 7].

The good news is magnesium supplements are a convenient way of overcoming magnesium deficiencies; however, there are many factors to consider when choosing a magnesium supplement that provides clinical efficacy. Whilst most practitioners are knowledgeable about the different forms magnesium may come in, many favourable forms of magnesium (citrate, bisglycinate, malate and so on) may still contain hidden magnesium oxide, the least preferred form, well known for its laxative effect and poor bioavailability. Let’s consider the points that will help you identify if your ‘go-to’ magnesium citrate, is really providing a magnesium reacted to citrate to offer superior absorption over magnesium oxide, or if it’s simply a magnesium oxide with added citrate, therefore not providing the benefits it promises.

Choosing the most bioavailable magnesium supplement

There are a number of magnesium supplements offering a range of bioavailability and health benefits. As we know, there are many factors to consider when choosing a supplement, which is why it’s easy to ‘stick to what we know’. When considering what makes a ‘good’ magnesium, the following factors should be considered because they have a direct influence on the efficacy of a magnesium supplement.

1. Elemental vs fractional magnesium – what does this mean to the bioavailability of a magnesium supplement?

As we know, the cheaper forms of magnesium supplements contain magnesium oxide, as its higher elemental fraction provides an easy marketing tool to boost label claims, with a supplement apparently delivering the full RI (375mg) in just 625mg total; however, at an absorption rate of just 4%, the amount of magnesium delivered is a pitiful 15mg! So what do we mean by solubility and how does this affect the bioavailability of magnesium?

While we know that the fractional amount of magnesium is important, the bioavailability of other forms of magnesium are much preferable (even though they may still contain hidden magnesium oxide…we’ll get to that bit).

2. Forms of magnesium – the importance of solubility and chelates in improving magnesium bioavailability

Table 2: Health conditions and diseases associated with low magnesium status for which magnesium therapy is, or may be, beneficial [adapted from 6 & 7].

Solubility – if the magnesium is insoluble, it cannot be absorbed

Whilst many are familiar with the concept that magnesium oxide is insoluble, here is a quick summary to detail how this affects the efficacy of an oxide-containing supplement.

Magnesium from magnesium salts (such as oxide, sulfate, hydroxide, chloride or citrate) is absorbed only after the magnesium is liberated from its salt. Solubility therefore refers to the ease with which a magnesium salt releases its magnesium ion and is one of the most influential factors affecting bioavailability.

Insoluble magnesiums (oxide, carbonate & hydroxide) require an acid environment to break the bond between the salt and the magnesium. In contrast, soluble salts such as citrate do not require the presence of acid to release their magnesium ion. Thus, citrate has an immediate advantage over the insoluble salts, because insoluble salts will remain unabsorbable unless the environment is favourable enough to break this bond between the salt and the magnesium. Once magnesium has been freed from its carrier, the majority will be absorbed via paracellular ion absorption pathways, (where magnesium moves between the tight junctions of the GI tract). This is important when we consider clients with high levels of stress, which magnesium supplements are often used to support, as low stomach acid levels often follow.

Chelates – an amino acid carrier with exceptional bioavailability and benefits

In contrast to magnesium salts, magnesium ‘chelates’, such as glycinate and taurinate, bypass ion channels and are instead absorbed in the same way that amino acids are absorbed from the diet. They can do this because the bond that joins magnesium to an amino acid is incredibly strong and works in favour of magnesium absorption because as the amino acid crosses the cell membrane, it pulls magnesium in after itself, essentially giving magnesium a free ride. The benefit of the chelate doesn’t end there. When considering the absorption of a magnesium salt, when the magnesium ion is liberated from the salt, unless it is immediately absorbed by an ion channel it remains extremely vulnerable, attracting water and becoming too big to be absorbed, or forming bonds with compounds found in food (oxalates and phytates) and becoming insoluble.

Unlike magnesium salts, the strong bond that exists between magnesium and its amino acid carrier minimises the accumulation of ‘free’ highly reactive, unstable ions. By not liberating magnesium, chelates prevent the formation of insoluble compounds that a salt would allow, thereby making them superior to salts.

As you can see, there are benefits to both magnesium salts and magnesium chelates in terms of bioavailability. By combining magnesium citrate, as a soluble salt, and magnesium bisglycinate and taurinate, as chelates, Triple Magnesium Complex is able to benefit from multiple unopposing absorption pathways – four, to be exact. Furthermore, these three forms of magnesium create a favourable acidic environment to protect free magnesium ions from interacting with food or water that would, under normal circumstances, interfere with magnesium uptake, and thus enhancing the absorption of free ions. 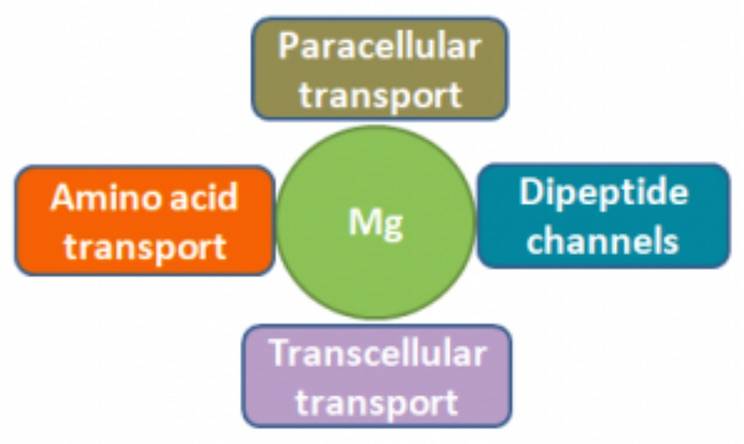 3. Finding the hidden oxide in your ‘superior’ magnesium supplement – the importance of ‘fully-reacted’

Magnesium ‘blends’ simply blend magnesium oxide with a carrier such as citrate. No reaction takes place, the elemental magnesium is 100% insoluble magnesium oxide, with citrate only added to lower the pH to favour the release of the magnesium ions.

If you are taking a magnesium product and experiencing gastrointestinal upset, the chances are it will be a blended product with high oxide content. In contrast, fully reacted magnesium forms complexes and are directly bound to the carrier via a manufacturing process, therefore containing no magnesium oxide and the total elemental magnesium is 100% soluble magnesium citrate. 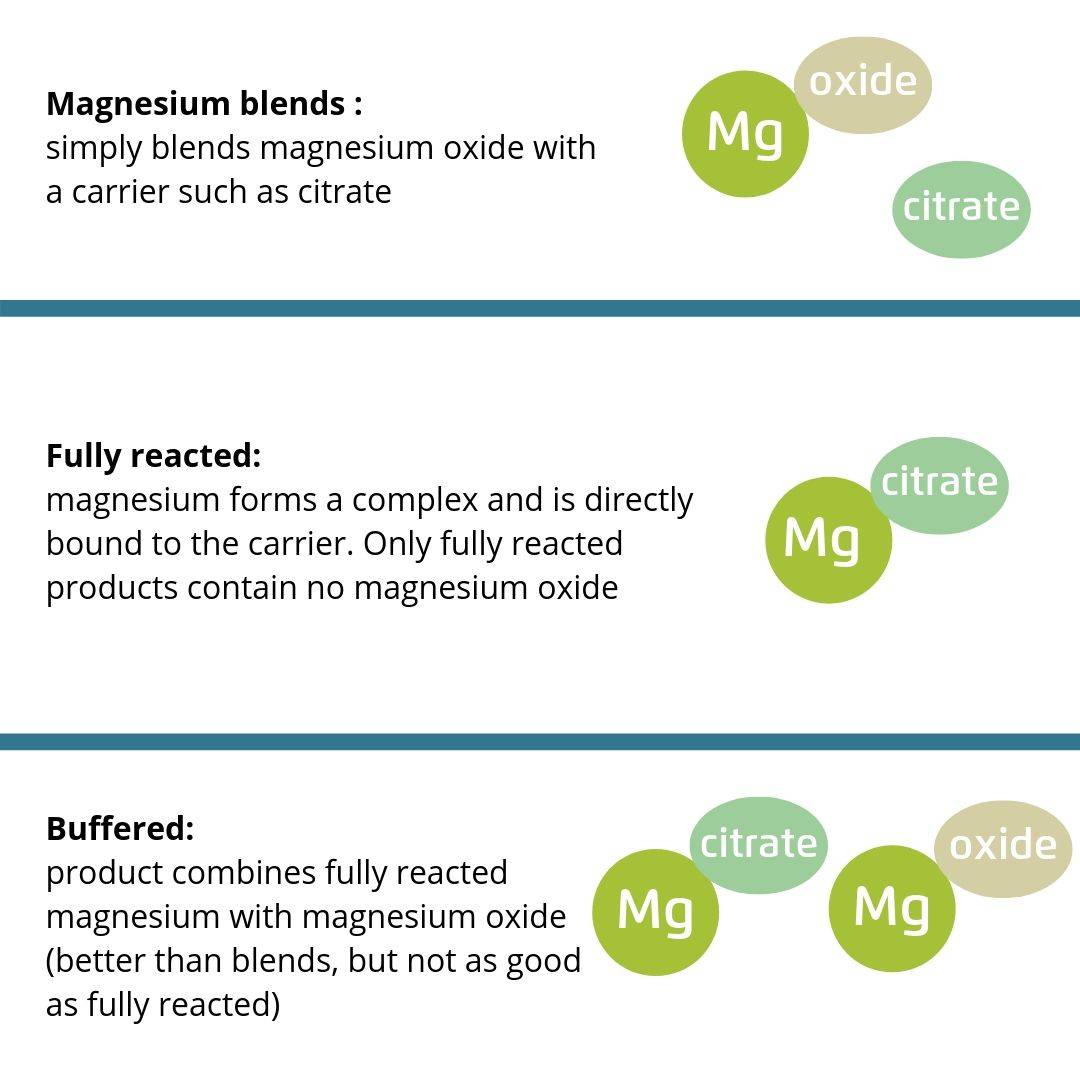 Our Triple Magnesium Complex of citrate, bisglycinate and taurate delivers 100% fully-reacted magnesium, so that practitioners can be confident they are recommending the most soluble, bioavailable forms of magnesium possible, with no risk of unpleasant side-effects.

Did you know? The laxative side effect experienced with magnesium oxide occurs as a result of the movement of water out of the mucosa cell and into the gut lumen in an attempt to equalise the concentration of magnesium between the two environments (osmosis).

4. The importance of dose – a formulation to maximise intake in the body

You may have noticed that Triple Magnesium Complex contains 52% of the RDA. Whilst this seems low, we have done this for a very particular reason. Studies have shown that the absorption of magnesium from a low elemental dose (less than 100mg) can be as high as 65% and that when the dose exceeds 250mg, the relative absorption is reduced to as little as 21%. (Fine et al 1991). It therefore makes sense to optimise the absorption and retention of magnesium by splitting our Triple Magnesium Complex daily dose into 3 smaller doses (68mg each). This carefully considered dose focuses on retention rather than excretion. As previously discussed, the body carefully regulates plasma magnesium levels, with excess intake above the body’s capacity to handle, simply resulting in magnesium loss. Our ethos is to focus on the efficacy of delivery, using three of the most absorbable and synergistic ‘carriers’ to target multiple, unopposed uptake pathways with the emphasis on split-dosing to optimise both absorption and retention. 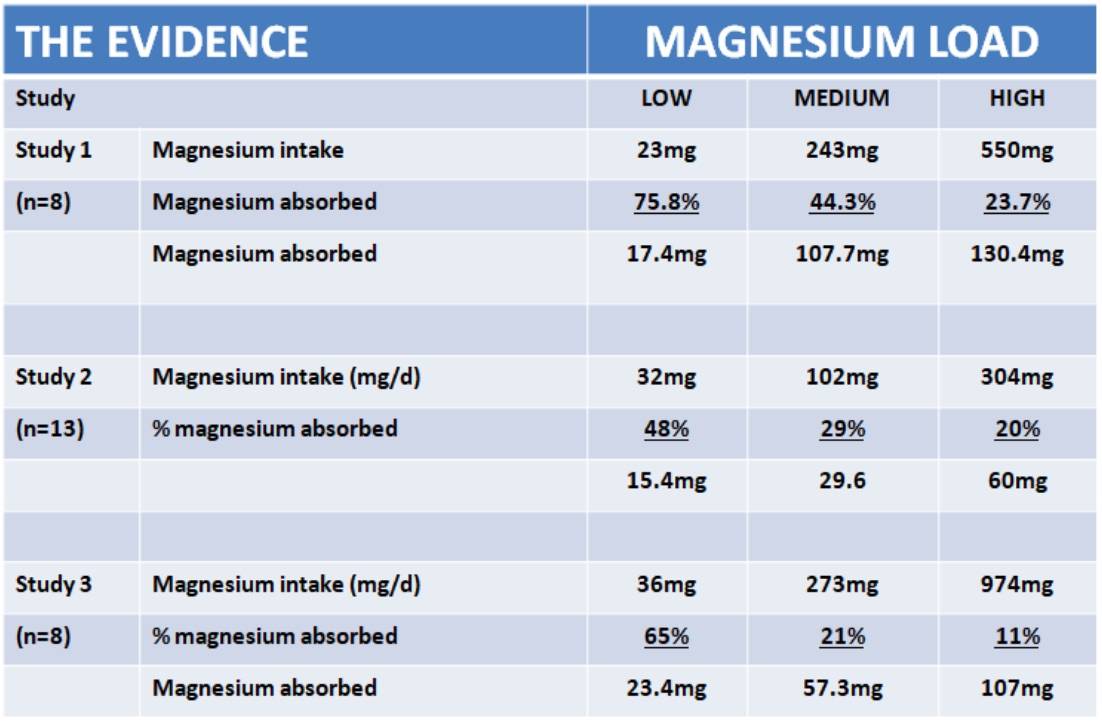 Let’s not forget – magnesium absorption takes place in the small intestine, with the absorption capacity influenced by the length of that intestinal segment, transit time, mucosal integrity, pH of the lumen, rate of gastric emptying, the size of meal and the use of motility and antimotility drugs. With this in mind, compared with formulations that overwhelm the body’s ability to absorb and retain magnesium, a supplement that offers a slow, sustained exposure to magnesium throughout the day will help optimise magnesium uptake more efficiently.

When considering magnesium supplementation, an individual’s current magnesium status is the primary influencer of how much magnesium is absorbed and retained. Therefore, higher doses may become appropriate when you have results to confirm blood levels are low, as absorption will be higher and less will be excreted.

5. Getting the best from your magnesium: choose your carrier wisely

Many practitioners select a magnesium supplement based on the added benefits of the carrier; citrate, for example, supports energy production, taurine supports insulin sensitivity and so on. By combining three forms, individual clients can benefit from every feature, negating the need for several supplements.

A brief summary of the added benefits of magnesium carriers

Glycine is involved in collagen formation, creatine formation, glutathione production and haemoglobin production, whilst also acting as an inhibitory neurotransmitter. The two glycine molecules in magnesium bisglycinate occupy the reactive sites of magnesium, preventing it from forming insoluble complexes (with phytates & oxalates), thereby helping to increase uptake and retention of magnesium. Taurine acts as an antioxidant and helps improve insulin sensitivity but is possibly best known for its cardiovascular benefits and for its positive influence on bone metabolism. In addition, taurine & glycine are highly effective carriers that, by acting as pH buffers, help create the optimal environment to aid magnesium uptake from citrate, allowing citrate to then feed into the citric acid (Krebs) cycle to help support energy.

Whilst choosing the best quality supplements is paramount for effectiveness, it is also important to acknowledge factors affecting an individual’s magnesium levels.

People who live on a diet that is high in refined and processed carbohydrates are at a higher risk of insufficiency/deficiency; this is becoming worryingly common and can have a significant negative impact on our health.

With rates of magnesium deficiency already high and on the increase, and the benefits of magnesium supplements well established, it is clearly a priority to choose the most effective magnesium product for use in clinical practice, in order to have the greatest impact on improved health. Triple Magnesium Complex is the latest addition to our clinical range of nutraceutical products, and we are confident it is the most clinically effective magnesium product available to practitioners. 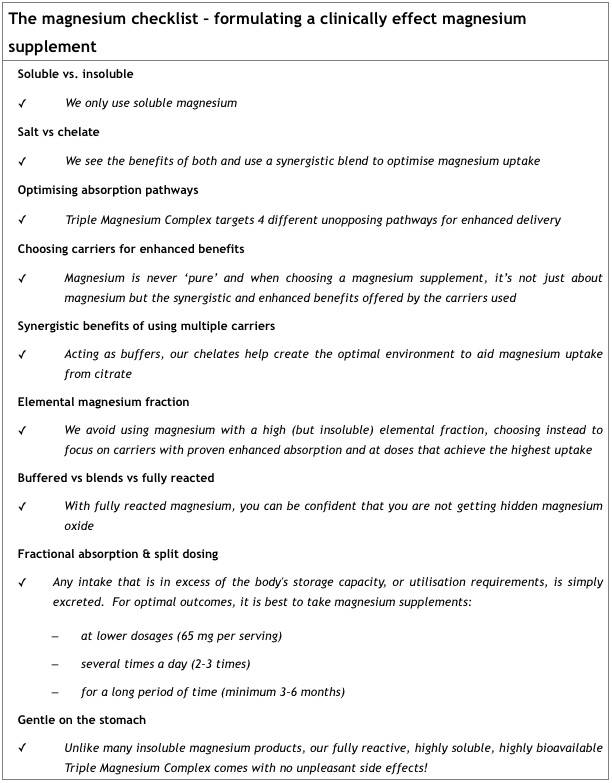